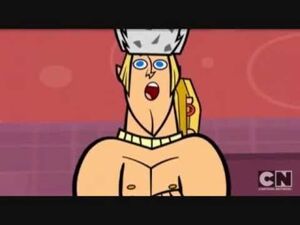 "Her Real Name Isn't Phasionor" is a song from Kamen Rider Zero-One: The Next Generation vs. Power Rangers Dino Fury. It is sung by Zion, with Phasionor's entourage as backup singers, in an attempt to list all the bad things about Phasionor as revenge. Zion is provoked into singing the song when Phasionor angered him by sending Orange Sunrise to Siberia against her will, when the original plan was for Phasionor to go there herself. The song is requested by one of Phasionor's biggest fans.

Here's an open letter to a treasure of a girl! (Phasionor: That's me!)
Whose behavior in this town always makes me hurl! (Phasionor: What?!)
She's a nasty, blue haired schemer, who calls herself "Your girl"!
Without the help of her entourage, her job would be toast!

She'll tell you that she loves your shirt, but it's something she can't stand!
She's just so full of you-know-what, she has to double flush the can!

She bought two pairs of the same jeans, one size four, and one size eight!
So when she wears the bigger ones, you'll ask if she's lost weight!

She's not the gal you think she is, so let me tell you plainly
There's thick black hair between her toes, and her real name isn't Phasionor!

Community content is available under CC-BY-SA unless otherwise noted.
Advertisement