Trixie's Christmas Rewind is a Christmas musical short from Minecraft Dimensions: Into the Sonicverse. It is performed by Trixie Lulamoon and Blueberry Cake. A tribute to Disney Channel's Original Movie, Descendants 3.

This Christmas song is about Trixie asking everyone to forget "The Queen of Mean" hissy-fit incident. It also features Blueberry Cake.

When Trixie Lulamoon was voted as "The Queen of Mean" at CHS after the Dark Emerald enhanced Another Wizard Infinity Style hissy-fit incident, Blueberry Cake made a performance with her at school to deal with her Queen of Mean problem with the help from Sunset Shimmer. Meanwhile, Zion "Pikachu18", Mordecai, Rigby, Astranova, Apple White, Raven Queen, the Ninja Turtles and Future Omega Ranger enlisted The Mandalorian's help to fight the Illager Army, while the two considered scouting some other new members for the Hero Squad.

All the decorations
And the lights up on the tree
Gifts in celebration
For our friends and family
Looking back now I regret being a tad extreme…
When Christmas comes around
Will it forget the Queen of Mean?

I was jealous, trapping the Rainbooms
I ruined Mint's friendship
And defeated the Conqueror
So I became Another Wizard Infinity Style
Got revenge on Aria Blaze and
Let him decimated my friends…

Let's see what's in the cards
Mm-hm, you took the game too far
Up to the roof just like that
Even called me a brat
I guess I could have done better
Shouldn't beat her in the Battle of the Bands
Will Christmas visit at all
Or skip us this December?!

Everything is gonna be fine

Just give me a chance
To reverse it
I don't deserve this
I was going outta my mind
Now they're gonna cancel
My Christmas
It was just business!

(Song ends with Troy Burrows, Flash Sentry, Neohi, Mesohi, Aria Blaze and Karai were impressed with Trixie Lulamoon's Christmas performance with Blueberry Cake, as Michelino applauds for the two girls)
Michelino: [laughs] Fantastic!
Mesohi: Awesome performance!
Troy Burrows: That was really amazing, you guys. I was literally speechless.
Blueberry Cake: Yeah. Thanks, Troy. Although, Trixie did apologized to Fluttershy, when she heard what Cherry said to her.
Neohi: Yeah, it is.
Aria Blaze: I usually referred Trixie as a friend.
Flash Sentry: Yeah, that's a great performance, Trixie.
Karai: Well, that's nice of you and Aria, Flash. But, has anyone seen Zion, Mordecai and Rigby?
Troy Burrows: Karai's right. But, I haven't seen Astranova, Apple White and Raven Queen.
(Scene cuts to Zion "Pikachu18", Mordecai and Rigby, who were in the Compound, as the two were scouting new members to join Hero Squad)
(Astranova, Apple White and Raven Queen arrived)
Astranova: Apple White, Raven Queen and I heard what happened to Herobrine, Zion. Are you and Rigby sure that you need to scout new members to join Hero Squad, Mordecai?
Mordecai: Yeah we are, Astranova. But, we need something bigger, stronger that Arch-Illager has never seen like new heroes, new weapons, new power-ups and new Zords.
Zion "Pikachu18": He's right. Luckily for me. I hired a newbie to fight the Illager Army. Everyone, say hello to Din Djarin. Also known as The Mandalorian.
(The Mandalorian arrived)
The Mandalorian: I'm a Mandalorian. Here to take the fight on the Illager Army.
Rigby: You hired that guy?
Zion "Pikachu18": Yep.
Rigby: Cool! (Takes a selfie with The Mandalorian)
Zion "Pikachu18", Mordecai, Apple White and Raven Queen: Rigby!
Rigby: Oh, sorry. You guys don't wanna be in it? Oh, bad timing.
Zion "Pikachu18": [sighs, to The Mandalorian] Well, that's one way for you to make a first impression.
The Mandalorian: Yeah. It sure does.
(Future Omega Ranger and the Ninja Turtles arrived)
Future Omega Ranger: Do you wish to fight with us, Din Djarin?
The Mandalorian: I will. Whatever it takes.
Leonardo: Welcome to the Unified Heroes, Mandalorian.
Michelangelo: Alright, Mando's in the team! Booyakasha!
The Mandalorian: "Booyakasha?" What does that even mean?
Donatello: It's what we usually said that.
The Mandalorian: Really?
Raphael: Yeah, it is. Mikey really loves to said that for battles and stuff like this.
The Mandalorian: Oh.
Donatello: I've made a new weapon for you, Mandalorian.
(Donatello hands The Mandalorian a Mandalorian Lightsaber)
The Mandalorian: Wha.. Wha... What is that?
Donatello: It's a Mandalorian Lightsaber. You could use your new weapon just like the Jedi, you like it?
The Mandalorian: Wow. I like it. I got my new weapon, Mandalorian Lightsaber? Thanks, Donnie.
Donatello: You're welcome.
[End of Trixie's Christmas Rewind] 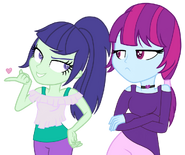 Mandalorian Lightsaber
Add a photo to this gallery
Retrieved from "https://freekamenrider.fandom.com/wiki/Trixie%27s_Christmas_Rewind?oldid=50223"
Community content is available under CC-BY-SA unless otherwise noted.